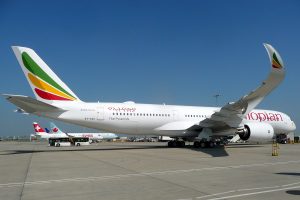 Ethiopian Airlines strengthens its fleet with the incorporation of new Airbus aircraft. These are four A350-1000 type aircraft that will enable the Ethiopian company to intensify its operations on several new international routes, and others that already exist.

The new aircraft are added to the A340s already integrating the Ethiopian Airlines fleet, configured to accommodate more than three hundred passengers in two cabins.

The A350-1000s are equipped with Rolls-Royce Trent XWB engines that consume 25% less fuel and reduce CO2 emissions compared to other aircraft it acquires in the fleet.

Mesfin Tasew, first manager of the airline Ethiopian Airlines, The A350-1000 is the ideal aircraft allowing the national company to intensify its operations in its international routes, especially on long-haul flights.
In another context, Ethiopian Airlines announced the inauguration of a direct flight to Bangalore in India, a line on which it operates three weekly flights from its base at Addis Ababa – Bole airport.