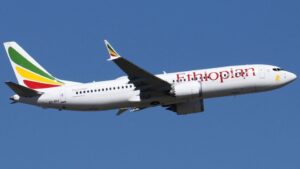 Ethiopian Airlines is expected to return its Boeing 737 MAX 8s to service in early January 2022, 34 months after the ET302 crash that left 157 people dead and brought all of the re-engined US single-aisle aircraft to a standstill in the world.

According to OAG, the 737 MAX 8 of the Ethiopian national carrier will gradually resume service from January 1 from its base in Addis Ababa Bole, on lines to the airports of Istanbul in Turkey, Cairo in Egypt, Khartoum in Sudan and Enugu in Nigeria. Nosy Be in Madagascar, Mahé in the Seychelles, Moroni in the Comoros and Entebbe in Uganda are also expected to return to the MAX early next year.

Ethiopian Airlines has so far received five of the 31 737-8 expected (including the destroyed one), configured to accommodate 16 passengers in Business class and 144 in Economy. The Star Alliance company had already announced this return in early September, CEO Tewolde GebreMariam then evoking according to the Seattle Times a financial agreement with Boeing, “satisfactory” but obviously without details.

The daily sources spoke of a payment of 280 million dollars, the replacement of the destroyed aircraft, discounts on future aircraft orders, and three years of free maintenance and spare parts, or about 600 million dollars. dollars of total value. “I can confirm that we are attached to the Boeing 737 MAX. My guess is that at the end of the calendar year or early next year, in January, we will be flying the plane, “the leader said.

Remember that the flight ET302 crashed five months after the Lion Air crash five months earlier (flight JT610, 189 victims). More than 400 Boeing 737 MAXs had been grounded around the world, the time to correct the MCAS software involved in the two accidents. The MAX 8 had recertified by the FAA in November 2020, with most regulators having since followed suit.